Testimonies from communities about how they are being impacted by the COVID 19. First Part.

Some buses of the public transportation service in Comasagua have increased the fare and have restricted schedules.

Many families are being affected in their finances since women go to work in San Salvador or Santa Tecla, but now the work has stopped to prevent people from getting infected, but this has generated lack of food for poor families.

Many cases of diarrhea and vomit have been reported too. The poorest families have not been included in the list of people who will receive the 300-hundred-dollar subsidy the government has announced, whereas some of the people who have been benefited are employees who do receive a salary (teachers and the like). 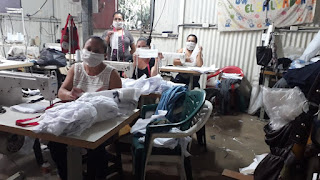 I would like to inform you that we have had to stop the work on social projects and monthly workshops because of the current situation. It should be noted that the cases of illness increased during the days when students were starting to work on their activities. Because of that, we have not been able to give the students their scholarship money of March. We had planned to do it on March 22, but just that day the mandatory domicile quarantine came into force and, as a prevention measure, the scholarship committee made the decision to postpone the delivery of money.

We are planning to deliver the money this week. We are aware that the economy of the families is not good because, due to the emergency, it is difficult for parents to go out to work and we know this money can help to pay for some basic needs.

We are attentive to the situation in the municipality and, up to now, we can say that people are obeying the prevention measures the government has implemented.

In terms of schooling, the work for students has not stopped since they are constantly receiving classes online and delivering tasks on virtual platforms so as not to lay behind in their activities.

So far, there has not been any case that may cause alarm in our communities.

Public transport is working so people in communities can mobilize to purchase basic things.

When this situation finishes we will hold a meeting, first with the scholarship committee and then with the students, to conduct an assessment from the point of view of each of them and to report how they lived the situation with their families, what inconveniences they have had, etc.

There are many difficulties that are affecting us, due to the disease and the quarantine that we are experiencing.

1. Many of the people who are parents are out of work.

There are people who are engaged in the extraction of shells. That is their only source of income, and they are out of work.

The cooperative has stopped its work without receiving salary.

The boatmen are also out of work because people do not leave the island.

2. It affects the economy in the same way. There are families of our young scholarship students where only one person in the family worked, and today they are out of work due to the emergency. The situation that is being lived is unfortunate, since most of the rural people do not have an income.

3. It is also difficult to obtain food, because you have to go to Puerto El Triunfo to be able to buy the necessary food. Not all the food is found on the island, and that is why you have to go out and buy it.

This is the situation we are experiencing in my community said scholarship students from El Espíritu Santo Island. 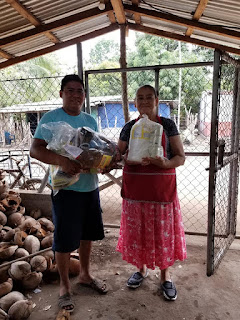