This past Sunday I turned out of the beaten-earth yard of a home in the community of San Luis Los Ranchos, leaving the chickens pecking beneath the mango tree. With each step the yellow dust of the road spilled over my boots; it was, quite literally, ankle-deep. But my mind was not on the state of my clothes as I walked, nor on the pines that shelter the coffee bushes in the adjoining finca (coffee-growing estate). I had just bid farewell to the family who’d welcomed me into their home each weekend for the past two months.

Typically I would arrive on a Saturday, teach an English class for community kids that afternoon, stay overnight, teach another class the following morning, and return to San Salvador late Sunday afternoon. In the family’s cocina (kitchen) I’d eat beans and corn tortillas, and sip coffee picked, roasted, and ground on-site. In their sleeping shelter at night I’d listen to the mountain wind buffeting the corrugated metal walls, and in their open-air communal area I’d read the story of “Senor Mole” with the kids. In the spare time we had we’d go for walks through the finca or play football in the local cancha (football/soccer field). 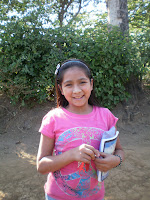 The end of the CIS teaching cycle meant that I now needed to move on, and I found it impossible to explain the reasons why to six-year-old Nahun. This had nothing to do with my limited fluency in Spanish. Unlike his 11-year-old sister, Michelle, he has no understanding of entrance visas and election observation missions. But unlike his three-year-old niece, Alejandra, who was still calling: “Clarita? Clase de inglés manana?” (English class tomorrow?) as I waved goodbye, he knows I won’t be coming back. 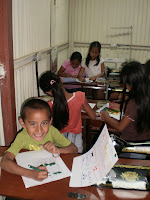 I came to CIS believing I’d be teaching English to adults in the city, and ended up teaching children and youth in El Salvador’s countryside, a choice that called to me when presented as an option. Mine was a very different experience from the other volunteers in the English program this cycle (January to March 2012), one that required weekend travel, an acceptance that classes might be cancelled when students had to work, help their families, or take part in other activities, and an understanding that the outdoor classroom could be used for community meetings. It also involved affirmation of the importance of learning more than ensuring acquisition of a language. I did not test my students, nor did they graduate from a level. As time passes, will they remember any of the vocabulary and phrases that we covered in our classes? Hard to say. But I think they will remember that someone – CIS – cared enough to make the time for them.

Posted by Unknown at 4:46 PM No comments:

Open Mic at the English School 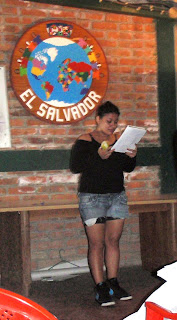 Two of our English School classes, Intermediate A and B, combined for an Open Mic Night.  The students prepared speeches, poems, and spoken word incorporating social themes that are important to them.  We are so very proud of the students! All of their speeches were passionate and very moving. Every student worked hard on preparing their performance... and we know it takes a lot of courage to speak in front a crowd.   We are proud of all who participated!

Congratulations to Natalie and Jean the teachers who coordinated this event!


Here is some of their work:

There are three public and twelve private universities in El Salvador. The most important universities are the University of El Salvador authorized in 1841 and The Central America University (UCA) in San Salvador. After the war, the participation of women became very significant. In 1993, some 77,369 students were enrolled at universities and other higher-level institutions; approximately 51 percent of these students were female. Attaining a university education is still the key to status in Salvadoran society.
Learning throughout life is important. Even our jobs require us to be competitive and that can be achieved only through constant learning.
Learning has the power of transformation. We can be very successful in relations, at home, with families, at the work place, or in any community. Learning helps us not only to solve day to day problems but also to change our attitudes.
Education and a demonstrated ability to learn are the most required criteria for hiring and employment success. Our jobs require us to learn as educational expectations continue to rise for both employers and employees. Major benefits of learning are as follows:
·        It enhances personal growth and opens expanded horizons
·        It increases employability and improves career development prospects
·        It provides us with the ability to create our own future
For these reasons and a lot more I invite you to get your degree.
I believe in you!!!.

People sometimes sleep, eat and wash in a homeless shelter.


Good evening everybody, I hope at the end of this speech, you will be convinced of my dream.

My dream is that one day in wherever place, everyone will live in a house where she or he be safe from whatever  dangerous  situation exists, like gangsters, drugs and weapon traffic.

I hope one day the wealthy countries will be able to provide some of their economic resources for those people.

It would be sad to live in the streets suffering those kinds of adversities. My dream is in the future all of humanity will live happy, sharing all the good things like: animals, plants and all kind of food that God created for all of them.

I don’t think my dream is impossible to become true, we just need the willingness of the powerful governments in the world to do it.

I am asking to my God don’t permit that I die before my dream will be true. 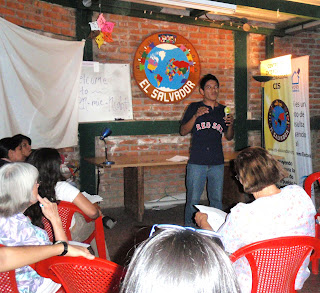 Public Transportation in our country is a real danger. The majority of buses need to be replaced for new ones. There is always fear that while you are traveling the bus could break down, because it is so damaged.
Another sad situation is that when you travel by bus you have a high risk of be robed and sometimes assaulted because they want your money, cell phone, jewelry or watch.
On the other hand, talking about the laws, we know that the law is not strong enough for the buses drivers, because sometimes they drive drunk or on drugs.
Perhaps in the future this situation could change. Some people are talking about new laws for public transportation in which they are going to take out all the buses that don’t follow the rules.
They are going to design new roads for the buses which are longer than the we have at this moment.
I am sure all people are waiting for a good change in the public transportation.

I always thought that we are equal like a human being, when I was a child my mom thought my brother and I were equal, were accomplice, were more than men and women we were equal, we made the same things in home, we sweep, we mop, we cook, we play cars, we hammering

I grow up with that idea, but when I face the true out of home I realize that wasn’t the true because I think we were equal but not everyone thinks the same

You don’t see??
The only difference we have is the gender

Don’t they see we are equal? We have the same organs, the same goals, the same feelings
God make us one for each other as a complement no one can create life on their own we need each other.

God made us like him with knowledge strength, confidence-women have strength to children and the men the strength to get the food.  Woman the knowledge to make a lot of things at the same time and men to create things to make the woman life earlier.

Why doesn’t the government see the same that I see?  Why in this country in particular women doesn’t have high positions in enterprises??

Woman are not lower, don’t they realize they come out of ‘a woman’

Why they treat us different?  Probably when they were children they believe there mother were a hero, but now?  They treat us like trash?

We are equal! When everyone realize that we are going to live in a better place.

-because the love is reprehensible, is derorous

+if I speak with the tongues of men and of angles and I have not charity, I am become as sounding brass, or a tinkling cymbal

+charity is patient, is kind: charity evenith not, dealeth not perversely, is no puffed up,
Is not ambitious, seeketh not her own, is not provoked to anger thinketh no evil

+Rejoiceth not in iniquity, but rejoiceth with the truth

-For we know in part: and we prophesy in part.

+We see now through a glass in a dark manner: but then face to face.  Now I know in part: but then I shall know even as I am known

+And now there remain faith, hope, and charity, these three: but the greatest of these is charity


Last night, English students, Spanish students, elections volunteers, and volunteer English teachers gathered for a multicultural experience. Each teacher presented information about their home country/region- sharing stories, photos, and food. Thanks to everyone for making it a great evening! 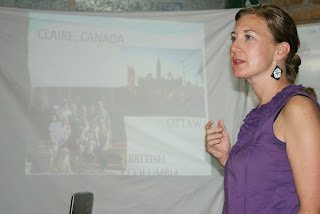 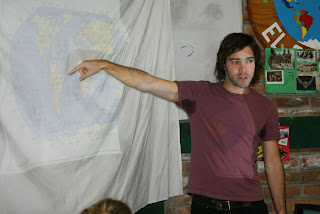 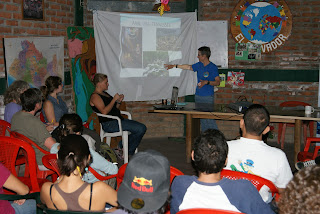 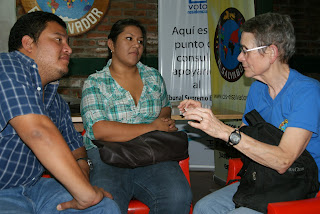 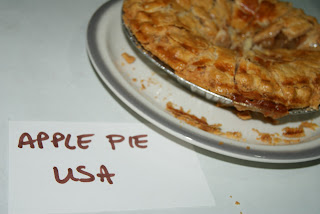 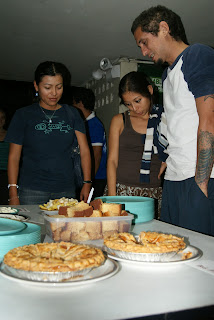 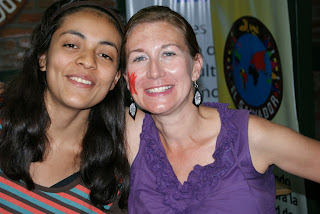 Posted by Unknown at 4:03 PM No comments: