My Visit with CIS Scholarship Students in San Rafael Cedros

In the context of CIS 25TH anniversary celebration August 2018, we invite people to share testimonies about solidarity work with CIS.   CIS began supporting grassroots organizing in San Rafael Cedros in 2001 as part of recovery and reconstruction after the 2001 earthquakes.   In 2006, after the visit of a member of Our Lady of Presentation Church a scholarship and youth leadership program began in 2007.    Rosa Maria Santana was  a first time visitor and March 2018 election observer wrote the reflection below after her meeting with CIS-Our Lady of Presentation Scholarship students.  (March 2018) 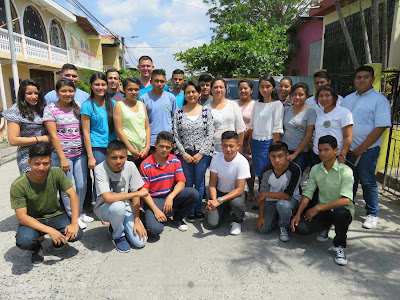 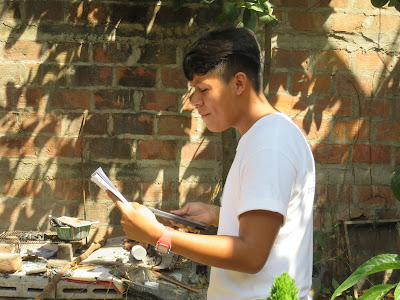 Some students hesitated talking about themselves. Others showcased their free-spirited personalities by welcoming the chance to elaborate on their research and on their respective lives. One young man—the first in his family to go to college—said his dad couldn’t read or write, so he was determined to do well with his studies. Many female teens said they’ll be the first woman in their families to earn a college degree. Another admitted streets near his school are rife with drugs. One aims to study the social sciences. Another wants to pursue an engineering degree, while another wants to teach. As they spoke, no one could deny each student’s commitment to community service and academic excellence—despite the fact that many of them face personal challenges. Each scholar’s optimistic outlook was infectious.

“What I enjoy most about my project is the chance to work with younger students,” said one male teen scholar. “I get to teach children the importance of clean drinking water and how that can affect the well-being of a community—and of our country.” 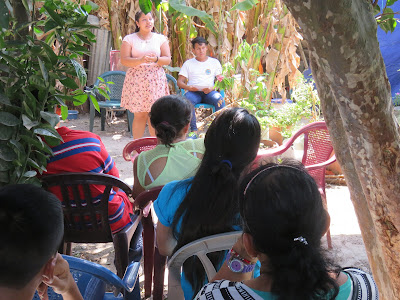 As they delve into their subject matter, these teen-aged scholars create lesson plans to teach younger students what they’ve learned. One female student said teaching what she’s learned helps her remember facts and details more vividly. And, this also challenges her to present her research in a creative, engaging way that captures the imagination and interest of children. These talented CIS scholars represent El Salvador’s bright future. Not only do they seek solutions to weighty topics, but they also share their knowledge with younger minds. They serve as positive role models to children who may also be the first in their families to go to college. Their optimism and dedication moved me because these teen scholars want to change their nation, one mind at a time. They rely on knowledge to improve the lives of others. While listening to them, I beamed with pride. El Salvador lies in astute, aspiring hands.
Posted by CIS at 8:49 AM 1 comment:

Propaganda in the El Salvador Elections

Propaganda, in all its controversy, is an integral part of each election in El Salvador. For the departmental and municipal elections this year, candidates have already begun their animated efforts to sway voters. Navigating the electoral code and assessing the recent situation of transparency help with understanding El Salvador’s electoral propaganda. 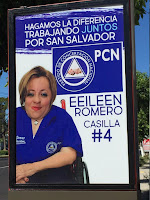 El Salvador’s updated Electoral Code denotes the regulations surrounding the election, including when and how candidates can display promotional advertisements for their campaign. According to the Code, senators running for office may begin presenting propaganda two months before election day, while mayoral candidates must wait until one month beforehand (Art. 172). Violations from any source of electronic or physical media (i.e. radio, TV, rallies, demonstrations, flyers, loudspeaker announcements)(Art. 175) will involve a fine between ten to fifty thousand colones, the previous currency for El Salvador. This translates to $1,114- $5,714.
The Electoral Code also lists the rules for promotional content and means of display. No party or individual candidate may advertise on public buildings, national monuments, trees, artwork, traffic signs, or on the walls of houses or buildings of which the owners did not give permission (Art. 179). The Code only allows candidates to hang posters and photos that are easy to take down- no paintings or permanent hangings (Art 173). Lastly, candidates cannot do damage; either in the form of insults and defamation to other candidates, or by promoting public disorder or property damage (Art 173). Common law deals with these violations. 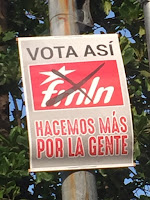 Although the Code seems to clearly list the regulations surrounding propaganda distribution and displays in the country, questions of transparency still arise. For example, with only one to two months of campaigning, candidates have little time to advertise. This time limit could be positive, in that all candidates receive equal promotional time and citizens live free from a year-long bombardment of campaign messages. However, it also means that citizens have little time, and limited resources to research the candidates. There exist virtually no websites listing the candidates and their platform, and even if there were, many Salvadorans in the rural communities live without internet access. Most Salvadorans see only propaganda advertised on their streets, some of it illegitimate, 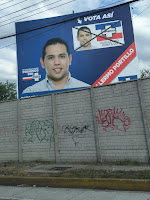 In addition, CIS observers have noted that the propaganda teaches people how to mark a ballot for a candidate or party, but as mentioned before, there is no message of political content or platform (pictured to the left and right). People are only told who to vote for and how to vote, but not why. This is another transparency issue that leads to misinformed voting.
Each of El Salvador’s eight leading political parties use propaganda cleverly, and sometimes even illegally, all in hopes of gaining more votes. Historically, elections in El Salvador have been a time of unrest and potential, wrought with heightened emotion of all descriptions. Today’s propaganda keeps that intensity alive as the country eagerly awaits the final results.

Written by: Sarah Hammaker
Posted by CIS at 1:26 PM No comments: