Education is everything, and this summer, I had the chance to re-learn that for myself. 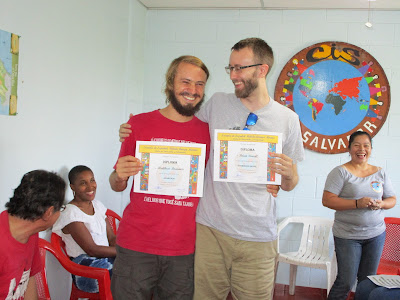 Yesterday I got back from San Salvador. I'll be processing this summer for a long time, and right now, I'm missing it so much that I almost don't want to think about it. But my spirit is very full right now, and I want to tell you what is filling it.

My spirit is full of gratitude. I'm grateful for the generosity of my family, friends, and colleagues. Asking for financial support for a project like this is a vulnerable thing. It meant a lot to me that so many people-- including folks I've never met-- donated to my campaign, shared it with their networks, and / or passed along encouragement. I'm also grateful to the team at CIS-El Salvador. They are doing vital work, and doing it well. I cannot recommend volunteering with this program any more highly. I'm thankful to the volunteers I worked with-- a diverse, inspiring crew who managed to challenge me and make me laugh each day. But most of all, I'm thankful to my students. The language school at CIS operates under the philosophy that "everybody teaches, everybody learns." This was certainly true for me. The "students" I taught were clearly committed, from day one, to generously educating me about the cultures and realities of their country. They took me out to see the city, they invited me to their homes, fed me, gave me books to read, and patiently answered a lot of stupid questions. They became friends.

My spirit is also full of new perspectives. I came to El Salvador because many of my students are immigrants from Central American countries. I wanted to learn more Spanish and gain a deeper understanding of the cultures and political realities that some of my students and their families have faced and are facing. I learned a lot. Such as: learning a language? Hard. I knew quite a bit of Spanish before I came here, but for the first few weeks, when people tried to talk to me, I froze up every single time. It was so intimidating and so frustrating. Teacher friends who are serving emerging bilinguals: please understand that "the silent period" in language acquisition real. Just because a kid is not talking does not mean that they are "lazy." I'm not saying I have all the answers for how to better support our students who are learning English, but I do know that sometimes we ask the world of our students and not enough of ourselves. We can do better, and by we, I mean me. Also: I already knew that U.S. imperialism in Central American countries has been devastating. But that abstract knowledge became a little more real for me when I stood in front of a monument in El Mozote and listened to two local women talk about the massacre carried out there during the Salvadoran Civil War in the '80s. Do you know this story? More than 800 civilians-- men, women, and children-- were systematically executed by a U.S.-trained battalion. Shortly after whispers of the massacre at El Mozote began making their way to the U.S., the Reagan administration officially certified that human rights conditions in El Salvador were improving under the current military regime. News of civilian massacres were inconvenient for the U.S; after all, the war was a big investment (at one point, we were giving $1.5 million in aid every single day to the Salvadoran government). The point is, before I started planning this trip, I knew none of this. So what else do I not know? And how does my knowledge of my own ignorance inform the way I view issues like "illegal" immigration from Central American countries? Also, how does it affect my commitment as a public school English teacher to do better for my many students whose families from countries that have suffered as a result of U.S. policies?

Finally, my spirit is full of memories. So I get home after work one day, and I realize I forgot my key. Because it's a June afternoon in San Salvador, it naturally starts pouring rain. I'm standing out in the street, not sure what to do, when the next door neighbor's door cracks open, and an old woman gestures for me to come inside. I spend the rest of the afternoon drinking coffee and chatting with a lovely family I have never met. They have two little girls: one is dressed in a Wonder Woman costume and wants to show me her superhero poses, and the other is crayoning pictures she keeps insisting are for me. Three hours later, there's a knock at the door. It's my host, but she's not looking for me. She had no idea I was there; she was just dropping by to give her neighbors some little pies she had baked. There is something instructive and implicating in the purity of moments like this. And there were a lot of moments like this. Planting trees on a misty mountain in Chalatenango with a group of local yoga practitioners, or participating in a giant, ridiculous dance circle with internationals and locals at a local bar until well after midnight, or watching young men participate in a rap cypher at a downtown skateboard festival, or marching in a massive sexual diversity pride march that made me feel more hope than I have felt in a long time-- when you want to learn about all the negative narratives that are stowed away in your subconscious, step out of your own social location and note what surprises you about the folks you meet. I am ashamed and grateful to report that I was surprised pretty much every day. It's a feeling I need to keep chasing.

It's a cliche to describe international travel as life-changing, but I do feel different. It was hard to leave. My work and my home are here, though, and I'm glad to be back. So once again: to everybody who helped make this trip be what it was for me: thank you. And yes, I wrote this as a five-paragraph essay with obvious transition words. I teach 7th grade English, and I want my students to understand that the writing structures we study are worth knowing, and not just to regurgitate information about context-less passages on a standardized test. Education is everything, and this summer, I had the chance to re-learn that for myself. Teacher friends: see you in a few days.

Everybody else: I love you and I hope I see you soon.

Writing by: Brian Powell
Posted by CIS at 12:36 PM No comments: