A trip to the country 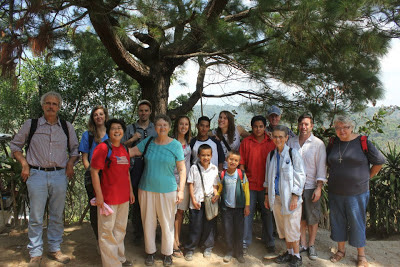 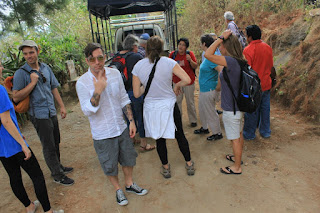 As our mini bus climbs higher and higher into the hills surrounding San Salvador, the scenery changes dramatically. Gone are the signs for fast food chains signs and the bedazzled rainbow- busses spewing black smoke. These hallmarks of city life are quickly replaced by things a little less jarring, less loud, less urban. Now? Dusty roads. Pick-up trucks. Chickens.
We’re headed to Zacatales, a pueblo some 35 kilometers outside the country’s capital and the site of two businesses in which CIS has played a role. But neither is a place one can reach via mini-bus. We park at the foot of a small mountain and transfer to a pickup, the only vehicle that can navigate the uneven and challenging dirt roads that will lead us to our first stop.
When we finally alight from the pickup and tumble onto the dusty road, we’re greeted by the smell of something baking. It’s not quite sweet, but it’s not quite savory. It remains a mystery till we cluster around the open door of the building we’ve stopped at and glimpse what’s happening inside.
There, a handful of women, and a few men, gathered around two tables, some pounding and rolling large balls of yellow dough as other tear off strips that they roll into what first look like crescent rolls that are soon stuffed with a milky filling and then pinched around the edges like an empanada. 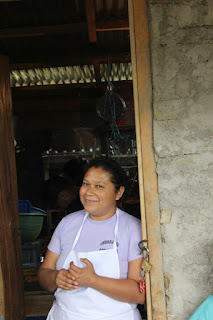 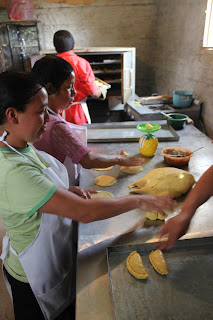 “They’re sweet, don’t worry,” laughs one of the woman in the cooperative and she wipes her hands on her apron. She is one of the villagers who run the bakery. Today, as a handful of them are busy baking, they share how they went from having almost nothing, to running this busy collective. 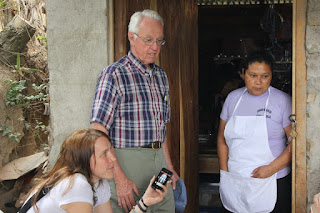 “We are grateful to God that we have the opportunity to come here and work everyday,” says another woman as she stands in the bakery’s doorway, the other workers bustling and smiling behind her, transforming piles of flour and other goods into a better future for themselves and their children.
It wasn’t long ago that there was little work in the community, and limited food that was produced locally. “In light of what we needed in the community, we decided to start a women’s group in 2006,” explains Mimita, one of the co-op founders. “Thirty of us organized into a group and a local representative of El Frente (the FMLN) came, and she helped us form a directive for the organization.”
Initially, the women started a cooperative to produce eggs, thanks to a US$ 50,00 from Primoere to build the coops, buy the chickens and create the means to care for them. As that business began to grow, the women’s dreams grew with it. 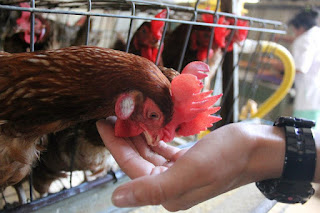 “Because we already had the eggs,” says Mimita, “we thought we could do more and with the proceeds from selling the eggs we decided to start a bakery, starting small by making bread in my house.” The group enjoyed making bread, and soon they had two flourishing businesses, with half the women working in the bakery and the other half in the chicken farm.

“Out of the egg project, we’ve also figured out a way to have some families have their own chickens. And we’re starting to do the same with cows. We collectively decide who in the community most needs these things, based on size of family and their income,” sys Mimita. The idea is to produce more calves and keep sharing them amongst those with the greatest needs. 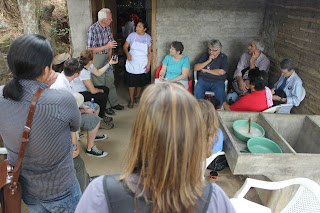 The way they make this decision is representative of how the group operates. It’s a participatory co-op with the women making decisions together. So the yield of these projects isn’t just salaries for the women, it’s also a sense of ownership, pride and authority, something that these women had not experienced in the past. And for Mimita and her co-workers, that’s almost as sweet as the pain dulce itself.
(And for the record, the recipe is a secret; all you’ll get when you ask is a smile.)
Not far away from the bakery, another group of women is savoring sweet victories, with nary a grain of sugar in sight. In the rolling hills of Comasagua the women of the Vivaz collective group are collectively blue –in the most positive interpretation of what that phrase might mean. 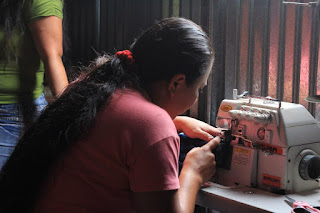 The Vivaz group is a collective made up of 12 women who decided to form a collective in 2005, an effort born of simple necessity. “There just was no work,” said Delmy, a worker and coordinator with the project. “We needed to do something, so we decided to try to do something for ourselves.”
One of the CIS’s grassroots organizers who worked in the town of Comasagua heard about the group, and brought them to CIS’s attention. “CIS asked if we wanted to learn some useful skills and we said, ‘Of course.’ We were told about Indigo, but we didn’t know what it was then. And through consults with CIS, we decided to undertake a crafts project to make items dyed with indigo. We started the training in indigo dying in 2006. “ 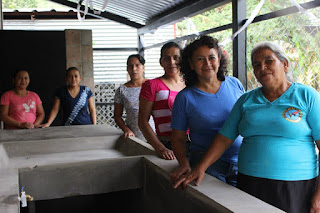 Since then, the group has had their struggles, including a large financial loss due to the purchase of a large amount of bad indigo. Eventually, the group built their own relationship with a reputable indigo association, and again began producing high quality work. After these financial losses, the women felt they needed greater control over the process, and that they should actually be producing the clothes they were dyeing. Yet none of them knew how to sew. CIS organized a training program through a local organization and with this training, the women learned how to produce create their own products from start to finish. As they were able to guarantee the quality of the indigo dye, the quality of the articles being dyed, and the design, both the quality of the products and sales increased.
It took some struggle to right themselves after their financial losses, but these women are clearly resolute, spurred on by both necessity and faith. Now, there are now 20 women involved in the collective, and the group produces large amounts shirts, skirts, t-shirts and scarves. Beyond these beautiful items, they’ve also fashioning a better future. “The living conditions of the women and their families have drastically improved since the collective began,” says Delmy.
But this change hasn’t been easy. In Delmy’s community, as well as in the majority of the rural areas in the region, the husbands make the decisions. “So these women depended on their husbands – for money, for choices - even what clothes she might wear,” she explained. 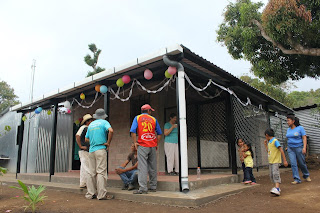 As the women began to earn their own incomes and develop a sense of pride and autonomy, these changes weren’t always well received. “In the beginning it was difficult to deal with - the men weren’t happy,” said Delmy. “ But we’ve learned how to defend our rights,” she said.  “The women began to resist and said,  ‘This is something that I am going to do, that I want to do because it’s going to be of mutual benefit to both of us and our families.’ So in time, the project has helped transform some of the men, and some husbands are even helping with chores to assist the newly busy women.”
Supported by grants and training from CIS and a variety of other NGOs, the collective is now opening up a new building, and the celebration is so large and boisterous that I can barely hear Delmy’s responses to my questions. Which, depending on how you think about it, may be the best response of all.