Joe is a Maryknoll lay missioner who arrived in El Salvador in January 2014.  Maryknoll is a community of priests, sisters and lay missioners of the Catholic Church who have been working in El Salvador since the 1960´s serving both local churches and community services. Missioners usually study Spanish and culture at CIS for their first three months in El Salvador and can, as Joe did, continue with individual  tutoring focused on his needs and interests.
Joe started language study with his Spanish at an intermediate level and progressed to the advanced level, more or less ready to survive on his own!  He attended classes during two national elections in El Salvador – the 2014 presidential election and the run-off – when the school was filled with election observers from many countries who were also studying Spanish.  Though large class sizes were a drawback, the election observer program offered students special field trips, speakers, and events to learn not only about the elections, but also the country’s history, ecology, and community organizations.
Joe learned a great deal from the field trips of the Political-Cultural program led by Don Oscar.  Some trips were planned in response to students’ interests. e.g. Joe’s interest in archaeology led to a visit Joya de Ceren, a place where an ancient Mayan village has been excavated and preserved.  Other field trips gave him the opportunity to practice translation in an easy setting.


The CIS staff also arranged for him to visit CIS community programs as a way to further learn about El Salvador – he traveled with Don Luis to visit some of the communities where CIS has a program providing clean water and with Delmi to one of the women’s sewing cooperatives. He participated in leadership workshops with Iris, gaining an introduction to the culture and processes used in community organizing here in El Salvador. 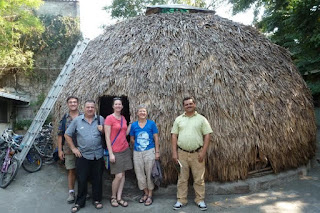 “The staff at CIS oriented me to basic safety for life here, which involved learning a new mindset of awareness and conscientious choices about where and when to go and how to get there.  They oriented us to the bus system, the neighborhoods, etc.  Safety here depends on being informed, and the best help CIS provides is a great staff from whom one can ask advice about getting around, and meeting other students – both Salvadorans and others – so you can always go with someone.

I first arrived at CIS, together with my mother, in June 2014. We had come to teach in the English school during the three-month summer term. Various vaccinations were required before I left Europe, and I think this was probably the most difficult part of the entire process! Once we had arrived, we were guided and advised by staff at CIS, who have a lot of experience in helping foreigners orient themselves to Salvadoran society. We were lodged with a very caring host family and discovered that El Salvador is good at providing substantial breakfasts with red beans, scrambled eggs, and fresh tropical fruit such as papaya and plantain -- and mango from the tree in the garden! After some training and discussion exercises at CIS, we began to lead regular classes. Students at CIS come from a variety of backgrounds and are highly motivated to learn English. The classes are based not only around grammar and vocabulary, but also around mutual cultural exchange between students and teachers. Students decide which political-cultural topics they would like to cover during that term’s class, and each lesson – the CIS has plenty of resources to help with lesson planning – is based around one grammar topic and one political discussion topic. During these discussions, students improve their vocabulary and their fluency
and confidence in speaking English, while teachers learn about the history and culture of El Salvador, and about the students’ views on the country’s current political situation. As well as teaching in the evenings, my mother took Spanish classes in the mornings. Spanish classes are based around much the same model as the English classes, a model which she felt helped her make rapid progress.

Teachers in the English school can also participate in the CIS’s political-cultural program, which involves visits to sites of interest around the city of San Salvador and indeed the whole country – as the country is so small, it’s easy to see a lot of it in a relatively short time. A highlight was our trip to Joya de Cerén, one of the world’s archaeological jewels: known as the Pompeii of the Americas, it is a farming village from that was preserved in ash during a volcanic eruption. It is
unique in giving us a look at the life of ordinary Central American people 1,500 years ago.

The English teachers and English school coordinators also traveled together to the remembrance site for the El Mozote massacre, which took place in 1981 during the civil war, and visited the Museum of the Revolution in Perquín and the National Museum of Anthropology in San Salvador. With friends, I visited the Museum of Folk Art, another hidden gem, which contains many remarkable and often humorous miniature clay sculptures.

While at CIS, I met several people who had been coming to El Salvador to volunteer every year for a decade or more.  I myself enjoyed my spell with the English school so much I decided to return to El Salvador the following January, in 2015, as an international election observer, taking up an invaluable opportunity to play a small part in the political process of this new democracy.

After my duties as an election observer were over, I stayed still longer, and traveled to the beautiful rural, mountainous area of Chalatenango in order to serve as an observer in a local referendum on whether to allow mining companies into the area. The result was overwhelmingly No, and the struggle to prevent mining companies from polluting local water sources continues. I know I am not the only CIS volunteer to have found it difficult to tear myself away from El Salvador, and to intend to come back again in the future!