Hi!
My name is Ana Gutiérrez, I live in San Salvador.
I work as a Physical Therapist, Occupational and Speech Therapist too.
I work with deaf people in my church, doing interpretation in Sign Language and I´m a volunteer in the Red Cross.

I´m learning English because knowing English, I can serve many people in different ways and places.
English helps me to have contact with English speakers who want to work with people that I work with. It allows us to do the work with more efficacy and we can provide more people with necessary services.

Why do you study English at CIS - what is special about CIS?

I enjoy studying English at CIS because I have the opportunity to practice my English with native speakers.
At CIS we have the space to speak about subjects and topics of social interest, and CIS provides us a good environment for expressing our opinions, It´s a good place for listening to different ways of thinking and for learning to respect others’ thoughts.
In CIS at the same time that we have an education of quality we don´t invest too much money.  This is a advantage for us; due to the economy in our country.  Salaries are really poor and in my case I couldn´t afford an education with native speakers and with this high quality in another institution.
The location of CIS is accessible for people who come from different places of San Salvador. The CIS´s facilities are comfortable and good for learning.

Why is it important to native English speakers to come to teach?

From my point of view, it´s important to learn English with native speakers because it helps us to learn the correct English pronunciation and at the same time we can learn to understand diverse accents. That is important because we can speak with people who come from distinct countries.
We learn about the cultures of the countries that our teachers are from and it´s good for us to have a better comprehension of the world.
I think it´s excellent for me to have the chance of to make new friends. 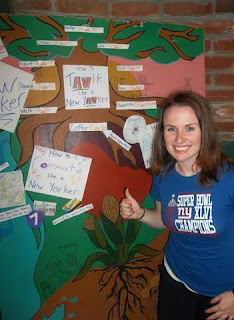 CIS changed my life in so many ways. From becoming proficient in Spanish which has opened a world of opportunities to me, to growing in solidarity with the people of El Salvador, to forming wonderful bonds with friends from El Salvador and around the world, to meeting my amazing Salvadoran husband, I can’t imagine my life now if I had never gone to CIS!
I studied at CIS several times between 2012 and 2014 for a total of about 6 months. I kept coming back because I could see I was improving and was fascinated with the classes. I started in level Basic B and finished in the Advanced.  Thanks to learning Spanish at CIS, I later worked as a delegation leader and translator at a NGO in El Salvador before I was hired at my current position as a social worker in Washington, DC in large part because of my Spanish proficiency. I now spend large parts of my workday working directly with immigrants doing clinical work in Spanish.
I was attracted to CIS because I knew Spanish fluency would be essential for the social services work I was going into and I wanted to study in a more meaningful way than typical Spanish classes.  I knew I wanted to go to El Salvador because I was also very interested in its rich history of liberation theology and struggles for social justice. The fact that CIS uses a popular education model and shares the lived experiences of people in Central America further drew me.  I wasn’t disappointed! The material presented a rich cultural and social justice history, and I felt absorbed in learning.  It was practical and useful and what I wanted – practice talking about issues – from water rights, to land ownership, to politics. The teachers come from shared or lived experiences that we are learning about and were eager to share their culture and history with us. And in the evening, I could use the language skills I was learning to bond with my host family over dinner or playing with their dogs to further deepen my learning experience.
The Political-Cultural program in the afternoons and some weekends was important, as well. I connected what I learned in class with seeing things and practicing using the language, which made the language and the history and social justice issues come alive. Some of the most powerful moments were hiking Puerta del Diablo, visiting the UCA massacre site, and learning to dye indigo. We experienced food, people, music, natural environment-all the special things that make El Salvador one of a kind.

I also experienced the country could be in solidarity with the people of El Salvador without feeling that my safety was compromised. We got a thorough security briefing upon arrival that left me feeling aware and prepared. My whole time there was without incident because of all the precautions put in place, and I never felt less safe that I do in my home city of New York – mainly we just took universal safety precautions that anyone would take traveling to any city.

Teaching English was a really powerful experience, as well. In addition to learning really helpful teaching and training techniques, by far the greatest learning experience I had was getting to learn from and hear first-hand accounts from my students about their experiences living in El Salvador in present time – while working on grammar they could also express from their heart. Also, it’s FUN! I did a ton of fun events with CIS to foster community, from cultural nights, to Halloween party, to a field trip celebrating “Teacher’s Day.” Some of my favorite exchanges were teaching my students about my home in NYC-
I made wonderful friends between my students and fellow teachers from around the world who were
studying, teaching and volunteering on election delegations – rich friendships that I still have 4 years later, some of whom even flew in from around the world to my wedding in El Salvador.

musician was my former English CIS student! I can’t imagine my current life now without CIS and would

encourage anyone considering a powerful and effective way to learn Spanish and apply! 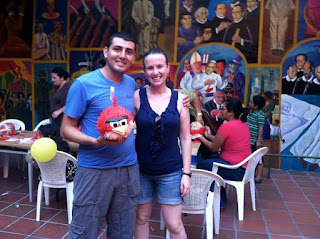