Natalie's Experience with the English School 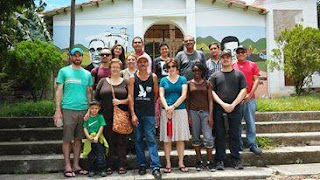 When I decided to spend the summer studying Spanish and teaching English at the CIS in El Salvador, I had very little idea what to expect. I arrived knowing almost nobody and nothing about the country, apart from what I had heard on the news and from the few people I knew who had traveled there. Little did I know I would walk away from the summer with not only new friends and incredible experiences, but also a newfound knowledge of and love for El Salvador.

Spanish classes at the CIS are unique because they focus on the history and current reality of El Salvador. The three teachers I had throughout the summer each had fascinating experiences, having worked with the government, youth, or unions, and were excited to share these experiences and their knowledge of the country with us. We talked about everything from poverty and wages to free trade agreements to gender roles in El Salvador. We watched documentaries about guerilla leaders during the civil war, short films about El Salvador’s environmental problems, and a speech from the current mayor of San Salvador to university students. We practiced speaking Spanish, talking about what our respective countries were like and finding many similarities.

These opportunities to learn about El Salvador didn’t stop with Spanish class, but continued into my English class. Over the summer, my students taught me as much about El Salvador as I taught them about English. They practiced speaking by discussing everything from consumerism to environmental problems in the country, and were excited to learn about America from me. Many of them were lawyers, students, or worked with non-profits, and each one brought a unique perspective to the class.

The best part of the summer was not only learning about El Salvador in the classroom, but getting to experience the country as well. With an incredible group of volunteer teachers, we traveled during days and weekends to various parts of the city and country. We went to the gay rights parade, a march to commemorate the 1975 massacre of University students, an island in the Pacific Ocean to visit a women’s cooperative which the CIS supports, and much more.

My favorite trip was a weekend spent in Cinquera, a small town about two hours northeast of San Salvador. It’s not only a beautiful town, but was also an FMLN stronghold during the Civil War, giving us an opportunity to learn about its history as well as appreciate it as it is today. We stayed in the town’s small hostel and spend an afternoon hiking in the nearby rainforest. With our guide leading the way, expertly cutting vines out of her way with a machete, we hiked up and down steep hills, visited sites that had been guerilla camps during the civil war, and swam in a pool at the foot of a waterfall. That night, we attended the commemoration of a 1984 massacre in the next town over. With a group of about 100 people, we marched down the main road towards the town, holding candles, chanting, and singing. When we reached the main road of the town, the mood turned celebratory, with the community giving away pupusas, cookies, and coffee, and a lively church service that went on all night. We learned about the history of the town and saw a wall, littered with bullet holes from the 1984 massacre, which made the sometimes abstract history of the Civil War feel much more real.

The next day, we visited Cinquera’s iguana farm and toured the town’s main square and many murals with a tour guide who was a former FLMN leader. He told us about the town’s history and explained how the American government helped the Salvadoran army cause destruction and commit many massacres during the war. But he also told us something which resonated with many of us. Although the American government has done many harmful things to the country, he said, American people have a history of being in solidarity with the people. We love Americans, he told us. We are grateful that you’re here, and we hope you’ll come back.


This attitude reflected what I experienced everywhere I went in El Salvador. I spent much of the summer learning about the damage that the American (and other foreign governments) have done and are doing to El Salvador, and returned home with a much more critical eye and awareness of America’s role in the world.  But I never experienced any bitterness or anger from the wonderful Salvadorans I knew. Instead, they were friendly, welcoming, excited to show me their beautiful country and make me feel at home. And by the end of the summer, I did.

-Natalie, the CIS thanks you for this blog, for your efforts with our English school and the laughter.
Best Wishes,
Posted by CIS at 1:02 PM 18 comments: