El Salvador in the Trump Era

Hello, my name is Rachel Kutler and I am from Baltimore, MD. I first arrived at CIS in September 2016, looking forward to being able to work towards a lifelong goal-- learning Spanish. I had just quit a very chaotic, busy job and decided to move to El Salvador with my partner, who is working for another human rights organization. I was excited to be able to focus my energy on learning Spanish and learn about Latin American history and social movements. 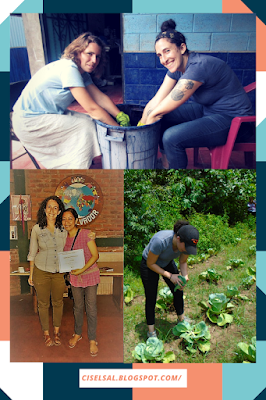 I began taking classes in Spanish and volunteering as an English teacher in the evenings. While it was a tiring schedule, I enjoyed learning everything I could about Salvadoran history, society, and politics. Wilmer and I spent our mornings discussing the history of the union movement in El Salvador and learning the subjunctive, while I spent my afternoons figuring out how to teach the conditional to my English students. I appreciated the welcoming environment at CIS, and the way in which we are encouraged to discuss and confront challenging social and political issues.

And then the US elections came. The days following the election were like a daze-- my emotions fluctuated back and forth between fear, anxiety, and denial. It was really difficult to be away during such a tumultuous time in the US. I wanted to be marching in the streets with my comrades and organizing against the Trump agenda. While I still struggle with how to be engaged in US politics while being abroad, my family at CIS was able to give me interesting perspective.

I've primarily encountered two reactions to the election of Donald Trump-- my students are scared about deportations and what it will mean for the income they rely on coming from their relatives in the US. We discussed how the country does not have the capacity or infrastructure to be taking in thousands of new people a week. And the other reaction is that people have been remarkably calm and level-headed, offering me wisdoms about what this moment means. Wilmer, my Spanish teacher, told me that "in El Salvador, we know how to laugh during times of crisis." Salvadorans have dealt with so much between the civil war and political upheaval, that they have a certain ability to take on crisis as it comes. In the days right after the election (when I was really losing my mind), I was surprised that people seemed so non-chalant. I think this is part coping-mechanism and part intrinsic understanding that the struggle for economic and social justice is a long and difficult one and therefore we must laugh. It reminds me of a movie we watched in class about an ex-FMLN comandante, called “Maria’s Story.” Despite losing a daughter in the war, being separated from her family, and constantly running from the bombs dropping overhead, she was constantly smiling and cracking jokes with the other guerillas.

Another student of mine shared, "It's better this way, because at least our enemy is out in the open." I thought that was an extremely apt analysis, and has proven to be an accurate prediction of the organized opposition in the first few weeks of the Trump presidency.


Being at CIS, and being able to have cross-cultural conversations about it all, has been a gift. It has helped understand this moment in US history in context to other liberation movements, and it has given me strength and inspiration to continue engaging in the fight for social and economic justice.