On Spanish Classes at CIS: A Reflection

As a Spanish student at CIS, I go to class every morning from 8-12. Our Spanish classes are based around popular education. They center conversation, helping students clarify how our experiences connect to social issues, and incorporating grammar along the way.

In my life here at night, I take in a lot. I go home to my CIS-arranged host family of two women who fought with the FMLN in the civil war, and talk with friends my age who lost parents in the war, all of whom are still healing. I also teach CIS English classes in which we talk about how people are affected by violence and neoliberalism in very real ways, and in which I am continuously striving to use popular education more effectively. 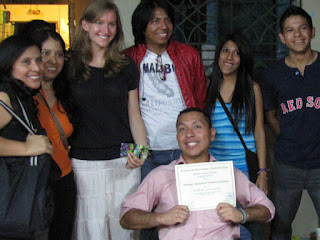 In class in the morning, through my teacher's open-ended questions and eternal patience, and my classmates' input and feedback, I begin to sort out what I’ve lived in the evening. As I’m understanding Imperfect Past Subjunctive in Spanish more and more clearly, I’m also understanding more and more about El Salvador’s present context and history, U.S. involvement, and my role in the communities I’m part of here and back home.

My experience at CIS has been that popular education is not pretty. It is not clean. It is messy, drawing from the people. And because of our identities and experiences, people are coming from fascinating but radically different places. So I have been learning patience, particularly from the example set by my Spanish teacher’s attitude toward her students, and through the space that struggling with Spanish has made for our class to hash out what exactly we think about social issues in ways we can sometimes move past too quickly in our native languages and spaces.

Last week in Spanish class, we talked about the struggling around gold mining in El Salvador. Specifically, we read (article in English), discussed, and did role-plays about the people’s legal and social battles with Pacific Rim, a multinational Canada-based company determined to invade to mine resources in the countryside here. It would do this at the expense of the health of the rural people and the land. 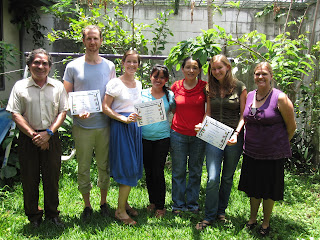 Spanish Students/volunteers with their teachers

As we read about the resistance movement and the company’s strategies to squash it—strategies including intimidation, assassinations blamed on the drug wars, and handouts of school supplies in affected communities to gain support—I thought of the stark similarities with Appalachia, U.S., near where I grew up. In Appalachia, there is an ongoing struggle with mountain-top removal. The companies use economic monopoly and social intimidation to keep people controlled, similar in some ways to strategies employed more recently and vividly here. On finding out about the almost complete lack of support for the struggle here from the environmental movement in the U.S., I started thinking/dreaming about the mutual support and learning that could happen between Appalachia and mining communities here if they could share each other’s struggles…

At the same time, one of my classmates connected the mining situation here with his interest in the environmental movement in the U.S. He first came here talking about “eating organic” and turning off lights. Through the Political Cultural Program, articles we've read in Spanish class, and class discussions, I have watched him develop a structural analysis of environmental damage, including the impact of the Global North and its neoliberal policies against the Global South, and our responsibility/potential as U.S.-ers.

At the same time as addressing issues, Spanish classes have helped me tremendously with language. I came to El Salvador 7 weeks ago hardly speaking Spanish, unable to work out even simple logistics. People would talk at me and I would open my eyes very wide, determined to understand, nodding and taking in the sounds if not their meanings. With the help of daily CIS Spanish classes, I have progressed quickly and can now discuss not only logistics but worldviews, histories, gossip, death, politics, gender roles, the future.

As a racial justice activist in the States, I knew I needed and wanted to learn Spanish but was terrified that it would be disrespectful to come here without adequate language. But my level of language has been one of the best things about my time here. Struggling with the language has slowed me down, as someone who normally moves busily through the world and speaks too quickly in English for most people to understand on the telephone. Here, I am hesitant, humble, listening, and each conversation takes my complete attention. The majority of people I have spent time with appreciate the space I have to listen to their experiences. Many people have shared breathtaking, often painful, parts of themselves with me. And Spanish classes have prepared me for this, both with understanding the language and the social context. 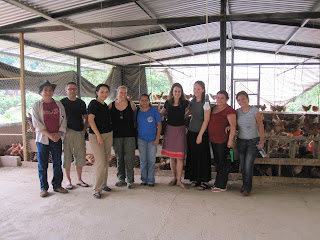 
Last week, the Spanish classes took a trip together to a community in the region that would be directly affected by the mining. In class, we had hashed out the messy history, politics, and reality of the mining struggle. Going to this tiny community whose fate is in the lurch, then, I felt as prepared as I’d ever be able to feel. Through the pain of Past Perfect Progressive the week before, I had developed the political context to be able to engage. And that has happened over and over. Spanish class has been a place where I can bring my questions to get clarity, where I can figure out what questions I haven’t asked yet that I need to, and where I can progress in Spanish to be able to understand and engage with people’s responses more and more without having to just nod and smile. 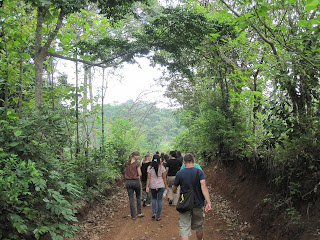