We arrived in Valle Nuevo well before the start of the official meeting and were welcomed into the home of Estéban, president of the Community Development Organization. We spent that time talking casually about some of the community’s struggles over water and land rights, organization and development, and other unrelated topics. Also, drinking hot chocolate. After community members arrived at the church across the street, the official meeting began, with Estéban presiding. 36 adults were in attendance.  CIS and Romero Community organized the meeting together with Valle Nuevo Community, thanks to a donation of Sawyer Water Filters donated by PeaceHealth after last year’s medical brigade. 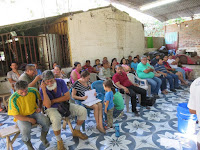 Estéban began by summarizing the committee’s recent meeting with the mayor, during which they talked about land rights and obtained credentials for the directors of the newly-registered Caserío Valle Nuevo Community Development Organization. He also spoke about the importance of working through legal channels to improve the community. He then summarized a fundraising plan, which amounted to soliciting $5 per family per month. Finally, he spoke about the importance of clean water and introduced Raúl.

Raúl began by outlining the process of working with the CIS Clean Water Program, including a letter from the Ministry of Health backing the Sawyer filters. He spoke of the potential for new plumbing for the school, and the community, which he has discussed with an engineer, and the need for the national water utility (ANDA) to modernize the community’s water system and piping. He went on to ask how many women were involved in the committee’s work and talk about the importance of having more women involved in the project. Finally, he briefly recounted his personal experience of the benefits of filtered water.

Next Luis stood to introduce the CIS and its various programs and the PeaceHealth Medical Brigade before going over some possible water contaminants, including parasites, and their effects. He then gave a summary of the water filter distribution process, including mandatory training on the filters’ use, hygiene, and care of the environment. He talked about the importance of storing drinking water in clean “virgin plastic” before giving a demonstration on the assembly and maintenance of a filter. Finally, he reiterated that there was to be one filter per family, and that someone from each family must attend the training.

To close this section of the meeting, Estéban stood again to thank the CIS and PeaceHealth and once again speaking about the importance of clean water for the community. A woman on the committee then took the names of each family present who wanted filter. Attached is a photo of the attendees after those wanting filters were asked to raise their hands. 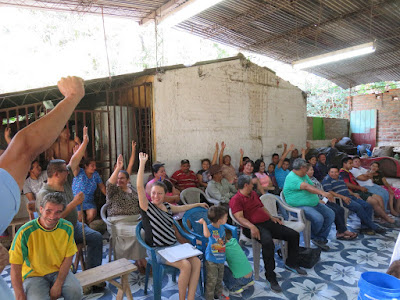