Congratulations to all of the English students who completed Cycle III-2012! We had a great end of cycle celebration. Here are some of the pieces that our student presented. 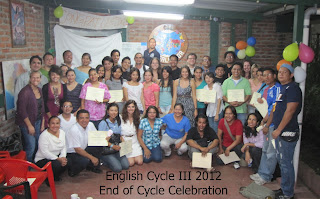 This is the video that the Basic B students made on mining in El Salvador:


This is the piece that our conversational student wrote to share at the End of Cycle Celebration.
El Salvador we live, El Salvador I love

There was a time when El Salvador was different. It was before the big landowners took our ancestors’ land by creating laws that benefited their greedy interests. Such event underlined the beginning of an oppressive system; it was the destruction of our way of living. 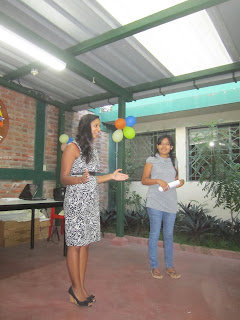 Some years later, another event marked the history of our country, It was the murder of 30, 000 Indigenous people whose struggle was to own a piece of land to make a living. It was a cruel and bloody period of Salvadorans’ lives. A period when asking for human rights to be respected was a crime. A period when asking for the right to a small piece of land was called communism. Indigenous people were called rebels, criminals, communists. At that time indigenous people lived in more peaceful and harmonic communities than us.

That is El Salvador, dear people. El Salvador, suffering from a 12 years’ war. War forced by the people with political and economic power. Once again, a period of bloodshed, torture, robbery, violence against the poor, against the campesinos, against the working class. A period when the official documents registered between 75,000 – 80,000 lost lives either by assassination or disappearance. A period when the bourgeoisie was able to commit crime against our most beloved pastor. The voice of the voiceless, Monsignor Romero along with many others who worked for social justice.

Yes, this is our country, people. The country where we do work for the value of our currency, but we are paid by the value of Mr. Dollar which is not fair. The country signing a Free Trade Agreement. Free for whom, I wonder.

But Friends, this is El Salvador. El Salvador, with a great population of working, welcoming, warming, hopeful, faithful people.

Listen to how wonderful our country is with such characteristics. Adding one more. We are all young people, young in age and hearts, and young people have the energy, courage, and definitely the power to change the history of suffering and oppression against the poor.  To change that privileged life of few.

Have you seen? The privileged have always been a few, and the working class, the majority. Why don’t we do something to change it? We should be able to see the light on the road. Let’s make it shine for everyone in our country.
Let’s show how much we love this beautiful country, our people, ourselves.
Let’s build a new, peaceful, fair and wonderful country!
If we don’t, who will do it for us?

Let’s make it together!